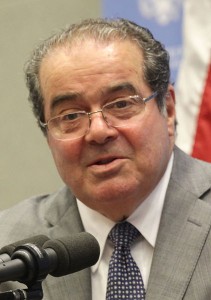 Dissenting from the denial of certiorari review in Elmbrook School District v. Doe, a case presenting the question of whether a school can hold its graduation in a church building, Justice Scalia had this to say:

Some there are—many, perhaps—who are offended by public displays of religion. Religion, they believe, is a personal matter; if it must be given external manifestation, that should not occur in public places where others may be offended. I can understand that attitude: It parallels my own toward the playing in public of rock music or Stravinsky. And I too am especially annoyed when the intrusion upon my inner peace occurs while I am part of a captive audience, as on a municipal bus or in the waiting room of a public agency.

There’s more about the case on the Constitutional Law Professors blog here.