Even if NYC is successful in paving the way for a law raising the minimum wage, the legal road can turn rocky. 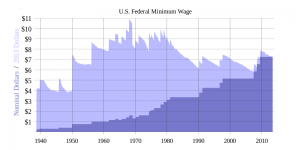 Seattle’s much-heralded raise of the minimum wage to $15 earlier this month has already been challenged.  In a lawsuit by the International Franchise Association, Inc. – – – represented by well-known conservative attorney Paul Clement, there are a raft of challenges including protectionism of local companies (a violation of the “dormant” commerce clause), treating franchised companies “unequally,” and even a First Amendment claim.   I’ve discussed the complaint in more detail on the Constitutional Law Professors Blog here.

Challenges to local minimum wage laws are nothing new.  As an excellent discussion by Steven Levine from CUNY’s La Guardia and Wagner Archives reminds us, in 1964 “Mayor Robert F. Wagner prioritized increasing the minimum wage from $1.25 to $1.50” as part of the war on poverty.  Wagner’s success, however, was short-lived.  The New York Court of Appeals (our state’s highest court) concluded that NYC  “Local Law 1964, No. 45, fixing higher minimum wage rate than State Minimum Wage Act, was unconstitutional.”   The case – – –Wholesale Laundry Bd. of Trade, Inc. v. City of New York, 15 N.Y.2d 604, 203 N.E.2d 652 (1964) – – – affirms the lower courts without even writing an opinion.  There is no dissent and it’s apparently so settled that there is no need for any explanation. 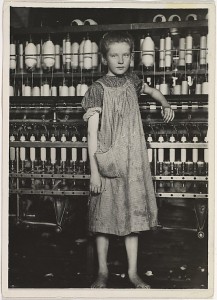 Spinner in a Cotton Mill, New England, by Lewis Hine, 1910

But the Seattle lawsuit is not simply concerned with city-state relations.  Instead, most of the claims of the complaint would apply to a similar scheme passed by a state and many would apply even if passed by the federal government. It shouldn’t be surprising that corporations have objections to paying workers what has been called a “living wage.”   Again, this is nothing new.  There’s more about these constitutional issues in the last chapter of my latest book, Dressing Constitutionally, considering slavery, child labor, the garment industry, and contemporary sweatshops.