If you had any doubts that lies, falsehoods, or half-truths were fine during political campaigns, they should probably be laid to rest.

In a 25 page opinion  replete with bolded underlined language, Judge Timothy Black held Ohio’s statutory provisions prohibiting political false statements in Susan B. Anthony List v. Ohio Elections Commission.  The United States Supreme Court last term  heard the case as Susan B. Anthony List v. Driehaus on the issue of whether the matter was “ripe” for review, since no one was actually prosecuted under the law, and unanimously held it could be decided, sending it back to the lower courts.  The Court’s opinion made little mention of the substantive First Amendment arguments, although at oral argument, counsel for the anti-abortion group Susan B. Anthony List, referred to the Ohio Election Commission as a “ministry of truth,” a characterization later echoed by Justice Scalia.

Judge Black refrains from an explicit Orwellian allusion, but he expresses a similar sentiment: “we do not want the Government (i.e., the Ohio Elections Commission) deciding what is political truth.” (bold underlining in original).  However, Judge Black does resort to a phrase attributed to the character Frank Underwood in the television show House of Cards: “There’s no better way to overpower a trickle of doubt than with a flood of naked truth.” (bold underlining in original).

These twinned rationales – – – the “Ministry of Truth” and the “flood of naked truth” – – – undergird the Judge’s doctrinal analysis, more of which is discussed here.  Although the judge gives a nod to his doubts that the truth will out given unlimited campaign spending constitutionalized by the Court’s interpretation of the First Amendment in Citizens United, that’s not sufficient to undermine the principles. 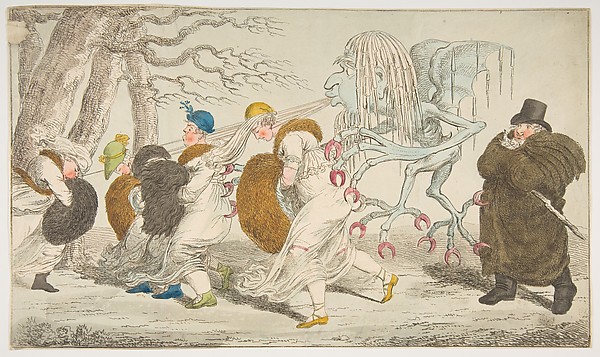 “A Naked Truth, or Nipping Frost” by Charles Williams circa 1803 via