While the Act of Settlement of 1701 is touted as a “resolution” of the relationship between Scotland and England that is again at issue with the Scottish independence vote,  legal regulation of clothes tells a different story. 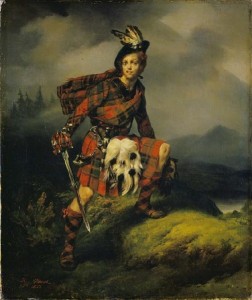 The relationship between England and Scotland was long mediated through laws passed by the English to regulate appearance.   Unlike England’s regulations of the Irish – – – which focused on  mustaches, hairstyles, and mantles – – –  the target of the Scottish attire regulations was tartan and plaid.   Even after the 1688 deposing of the controversial and Catholic King James (known as James II as King of England and Ireland, and as James VII as King of Scotland), there were continuing battles and royal contestations.

In 1746, after another Jacobite “uprising” in the north, Parliament under King George II passed an “An Act for the more effectually disarming the Highlands in Scotland; and for the more effectually securing the Peace of the said Highlands ; and for restraining the Use of the Highland Dress; and for further indemnifying such Persons as have acted in Defence of His Majesty’s Person and Government, during the unnatural Rebellion.”[i] While much of the Act concerns firearms, including permissible search and seizure processes, section 17 prohibits Scottish dress:

no man or boy, within that part of Great Briton called Scotland, other than shall be employed as officers and soldiers in his Majesty’s forces, shall on any pretence whatsoever, wear or put on the clothes commonly called Highland Clothes (that is to say) the plaid, philibeg, or little kilt, trowse, shoulder belts, or any part whatsoever of what peculiarly belongs to the highland garb; and that no tartan, or partly-coloured plaid or stuff shall be used for great coats, or for upper coats.

By its terms, the provision only applies to males, but it is otherwise quite different from the “acts of apparel” of two centuries before. The punishment to be imposed reflects the severity of the infraction as a crime of “unnatural Rebellion” as well as the status of “Great Briton” as an empire: a first offense is imprisonment without bail for six months; a second offense would render a person “liable to be transported to any of his Majesty’s plantations beyond the seas, there to remain for a space of seven years.”

And so the colonies were “settled” by a plaid-wearing people.

Excerpted from Dressing Constitutionally: Hierarchy, Sexuality, and Democracy from Our hairstyles to Our Shoes