The Sixth Circuit’s opinion today in DeBoer v. Snyder upheld the constitutionality of several same-sex marriage bans, reversing the district court decisions in Kentucky, Michigan, Ohio, and Tennessee.  This bucks the trend in which circuit courts have declared such bans unconstitutional: the Seventh Circuit in  Bogan v. Baskin and  Walker v. Wolf,  decided in September, regarding the same-sex marriage bans in Indiana and Wisconsin; the Tenth Circuit in Herbert v. Kitchen, an opinion issued in June regarding Utah’s prohibition and Smith v. Bishop, extending Herbert’s reasoning to the ban in Oklahoma; and the Fourth Circuit in Bostic v. Rainey regarding Virginia’s ban. 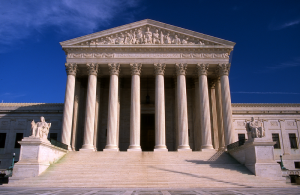 And – – – more importantly – – – it creates a “circuit split” making the possibility that the United States Supreme Court will accept discretionary review much more likely.

The Sixth Circuit’s opinion is a divided one by a three-judge panel. The majority’s basic theme is judicial restraint: judges, especially federal judges, should not be deciding the issue. The dissenting judge begins her opinion with a scathing assessment of the scholarly quality of the majority’s opinion:

The author of the majority opinion has drafted what would make an engrossing TED Talk or, possibly, an introductory lecture in Political Philosophy.